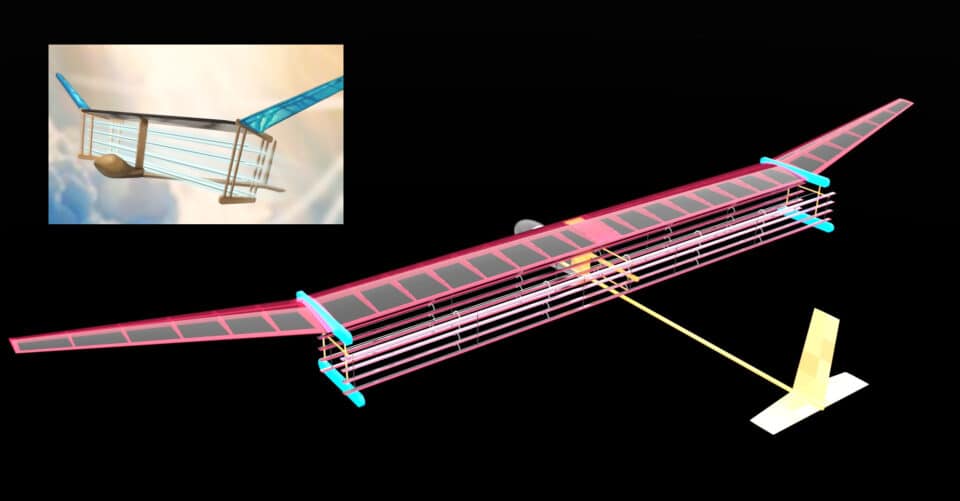 Since 1921, scientists have been trying to develop an aircraft that flies using ion thrusters – albeit at first, it was mistaken for anti-gravity technology. The concept hasn’t been successful until now because our technology wasn’t advanced enough.

Recent key advances have made it possible for a team of scientists, led by Steven Barrett from MIT (the Massachusetts Institute of Technology), to create an electroaerodynamic-powered plane – an aircraft that uses solid-state propulsion. The plane doesn’t use propellers or jet engines with expendable fuel. Instead, it’s powered by an ion drive.

Barrett says in the video below:

The future of flight shouldn’t be things with propellers and turbines. [It] should be more like what you see in Star Trek, with a kind of blue glow and something that silently glides through the air.

Several thin electrodes are running across the wings, which also have thin wires at the front and an aerofoil (a curved surface to produce the lift) at the back.

The electric field strips nitrogen molecules in the air of electrons, producing ions in the front. As the ions accelerate to the back, they generate an ionic wind, giving the plane thrust.

The plane doesn’t require a propellant. It only relies on those thin wires and an off-the-shelf lithium-polymer battery.

The basic idea is that if you ionize the air, which means removing an electron from it, you can accelerate the air with an electric field. Like the force you get if you rub a balloon on your head.

The plane flew around 200 feet (60 meters) in approximately 12 seconds over the course of ten test flights in a gym. It had a thrust efficiency of about 2.6%, but that figure increases as the system’s efficiency increases. So, a 670 miles (1,080 kilometers) per hour plane would theoretically be 50% efficient.

It was exhilarating. Then it crashed into the wall, which wasn’t ideal.

[Nevertheless], it is possible to fly planes that are solid-state, and we demonstrated that for the first time.

I don’t yet know whether you’ll see large aircraft carrying people any time soon, but obviously, I’d be very excited if that was the case.

The technology is still minimal, and the plane very much a prototype, but the future potential is inspiring.
For now, the team continues to test the plane in the hopes that people could use its thrust system to power small delivery and inspection drones in the near-term. They would be near-silent and propeller-less, making them safer.

Imagine 10 or 20 years from now—we could have drones everywhere. If those are all noisy, they’ll degrade our quality of life. But this is silent.

So far, the team has gotten the plane to turn in the air (with remote control) instead of simply flying in a straight line – so advances are being made! In the long-term, such an airplane could help the aviation industry become carbon neutral.

AI Doctors Are As Skilled As Human Experts In Medical Diagnoses