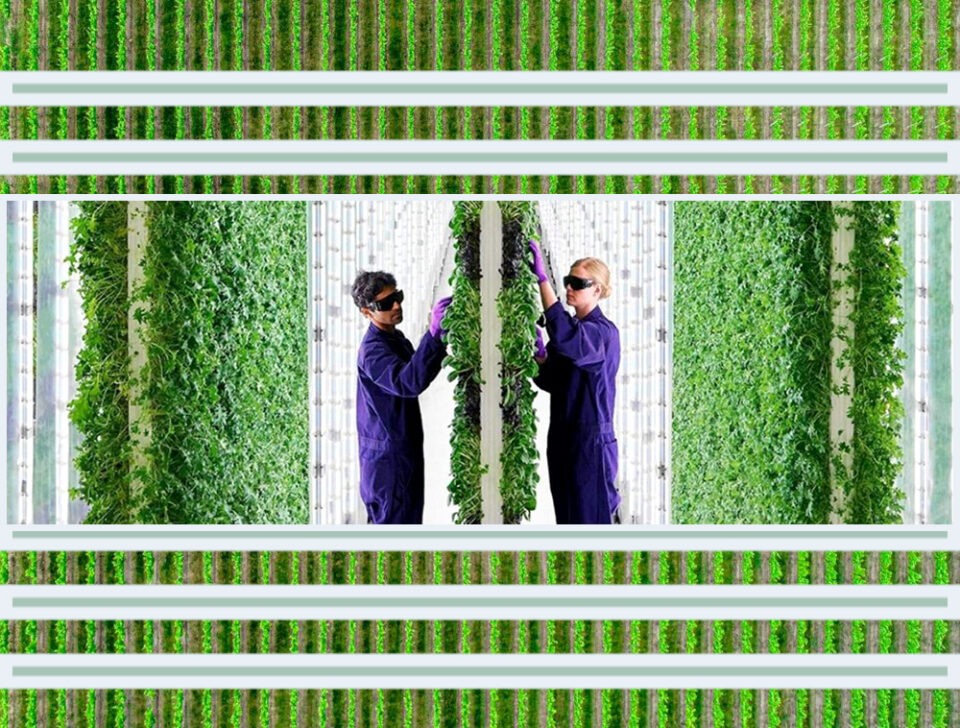 Plenty is an ag-tech startup in San Francisco, co-founded by Nate Storey, that is reinventing farms and farming. Storey, who is also the company’s chief science officer, says the future of farms is vertical and indoors because that way, the food can grow anywhere in the world, year-round; and the future of farms employ robots and AI to continually improve the quality of growth for fruits, vegetables, and herbs. Plenty does all these things and uses 95% less water and 99% less land because of it.

In recent years, farmers on flat farms have been using new tools for making farming better or easier. They’re using drones and robots to improve crop maintenance, while artificial intelligence is also on the rise, with over 1,600 startups and total investments reaching tens of billions of dollars. Plenty is one of those startups. However, flat farms still use a lot of water and land, while a Plenty vertical farm can produce the same quantity of fruits and vegetables as a 720-acre flat farm, but on only 2 acres!

Vertical farming exists because we want to grow the world’s capacity for fresh fruits and vegetables, and we know it’s necessary.

Plenty’s climate-controlled indoor farm has rows of plants growing vertically, hung from the ceiling. There are sun-mimicking LED lights shining on them, robots that move them around, and artificial intelligence (AI) managing all the variables of water, temperature, and light, and continually learning and optimizing how to grow bigger, faster, better crops. These futuristic features ensure every plant grows perfectly year-round. The conditions are so good that the farm produces 400 times more food per acre than an outdoor flat farm.

400X greater yield per acre of ground is not just an incremental improvement, and using almost two orders of magnitude less water is also critical in a time of increasing environmental stress and climate uncertainty. All of these are truly game-changers, but they’re not the only goals.

Another perk of vertical farming is locally produced food. The fruits and vegetables aren’t grown 1,000 miles away or more from a city; instead, at a warehouse nearby. Meaning, many transportation miles are eliminated, which is useful for reducing millions of tons of yearly CO2 emissions and prices for consumers. Imported fruits and vegetables are more expensive, so society’s most impoverished are at an extreme nutritional disadvantage. Vertical farms could solve this problem.

Supply-chain breakdowns resulting from COVID-19 and natural disruptions like this year’s California wildfires demonstrate the need for a predictable and durable supply of products can only come from vertical farming.

Plenty’s farms grow non-GMO crops and don’t use herbicides or pesticides. They recycle all water used, even capturing the evaporated water in the air. The flagship farm in San Francisco is using 100% renewable energy too.

Furthermore, all the packaging is 100% recyclable, made of recycled plastic, and specially designed to keep the food fresh longer to reduce food waste.

The future will be quite remarkable. And I think the size of the global fresh fruit and vegetable industry will be multiples of what it is today.

Ideally, the company will branch out, opening vertical farms across the country and beyond. There can never be too many places graced by better food growing with a less environmental cost.

Here’s a TechFirst podcast about the story behind Plenty:

This Campsite Is Filled With Unique Pods Made From Upcycled Waste