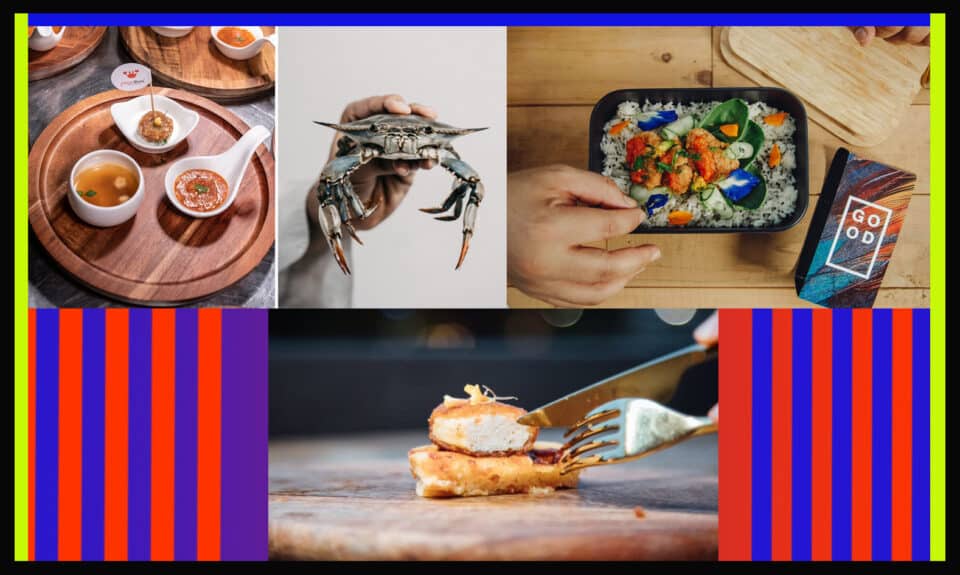 The world’s pace of meat consumption is placing a significant strain on the environment. Many studies show that eating less meat is just as crucial to slowing down global warming as using solar panels and zero-emissions vehicles. Animal farming generates an obscene amount of greenhouse gas emissions.

That’s why the demand for alternatives to animal meat has surged. Consumers are concerned about the environment and animal welfare. As a result, two choices are rising in popularity: plant-based meats and cultured meats. The meat alternatives market is estimated to reach $140bn (£104bn) within the next decade. That’s about 10% of the $1.4tn global meat industry.

Plant-based foods’ emissions are 10 to 50 times smaller than those from animal products. Cultured (lab-grown) meats generate up to 96% fewer emissions, use up to 96% less water, and require 99% less land than traditionally farmed meats. And no animals need to be slaughtered in the process.

According to the Straits Times (ST), Esco Aster, a home-grown contract development and manufacturing organization, has already begun operations at its commercial facility in Singapore. The facility, located in the 8-story Ayer Rajah Crescent, produces chicken products via cell culture instead of slaughter. On July 28, it was given SFA approval and began making cell-cultured chicken – a world first.

Esco Aster’s facility paves the way for more protein alternatives to enter the Singapore market and enhance the nation’s food security. In December last year, the Singapore Food Agency (SFA) was the world’s first regulatory authority to approve the sale of cultured meat – chicken nuggets from Eat Just – after it was deemed safe for consumption.

Cultured meat is meat products made from growing animal cells in a bioreactor – like the tanks used in brewing beer – instead of slaughtering real-life chickens. This method is considered a more sustainable approach to producing meat since large volumes can be made using less land and labor.

Esco Aster, a subsidiary of the Esco Lifescience Group, has supplied tools and technology, including bioreactors, to companies in the alternative proteins industry. The firm also offers manufacturing services for vaccine development and cell- or gene therapy, among others. Esco Aster’s chief executive Lin Xiangliang told ST on September 15 that, thanks to this professional background, Esco Aster designed the manufacturing facility to the standards required by SFA.

In Singapore, company’s who wish to produce cultured meat products must first conduct and submit safety assessments of the products for SFA’s review before they’re allowed to sell them. These assessments comprise potential food safety risks, such as toxicity and production method safety. In addition, companies must also provide detailed information on the materials used in the manufacturing processes and how these are regulated to prevent food safety risks. Finally, firms that plan to manufacture these approved products in Singapore must obtain a separate SFA license.

If companies wish to manufacture any already-approved alternative protein products in Singapore, as with any other food, they must obtain an SFA license and are subject to checks by SFA of the premises, systems, and products. SFA will also inspect and sample the product for testing, just as we do for other imported and locally manufactured food products.

The only cultured meat product approved for sale in Singapore is Eat Just’s cultured chicken bites. “We have multiple production partners for Good Meat and look forward to growing our business in Singapore, which will be a manufacturing hub for the company,” added a spokesman for Eat Just.

According to the FAO, alternative proteins are gaining interest globally as an increasing number of consumers become conscious about the massive carbon footprint of nurturing livestock for food, which produces roughly 15% of global GHG emissions.

While this is an emerging field, with Singapore the only country approved to sell such products, many cultured meat consumer goods are already being made in smaller facilities and laboratories at a smaller scale. However, a commercial plant in Singapore could enable the production of such alternative proteins to be scaled up more rapidly once they’re approved for sale, bringing costs down.

This move is the clearest sign yet that the Lion City is all in on scaling up alternative proteins and driving Asia’s runaway lead in food technology. Other nations would be wise to follow Singapore’s example by investing in this smarter way of making meat before they get left behind.

Around 20 companies producing lab-grown meat and plant-based protein have set up bases in Singapore over the last couple of years.

The country currently imports over 90% of its food from more than 160 countries, and the pandemic has affected vital global supply chains. However, the government aims to have 30% of Singapore’s nutrition from domestic sources by 2030.

Singapore is the first country to develop a regulatory framework to bring cultured meat to the market. In May, the Future Ready Food Safety Hub opened to help companies navigate the approval process to accelerate their products onto consumers’ plates.

The city-island-nation with almost no livestock and hardly any agricultural land hopes to become a meat producer eventually. “Singapore provides a path to commercialization. It is the only place in the world where that’s possible,” commented Carrie Chan, the founder, and CEO of Avant Meats, a Hong Kong-based company developing cultured fish in Singapore.

The first cell-based meat firm in Singapore, Shiok Meats, has unveiled the world’s first lab-grown crab meat at a recent tasting event in Singapore. Shiok Meats creates authentic seafood from a small number of animal cells in a laboratory, a technique used to produce food without relying on industrial fishing.

We are ecstatic that we were able to showcase the first-ever cell-based crab meat that we produced in our facility. We are humbled by the support and enthusiasm of our team, investors, and collaborators. In this exclusive tasting event, we invited some key stakeholders in the food and alternative protein industry.

Two of these dishes mixed Shiok’s cell-based crab with other innovative products to create:

The ingredient is really versatile, and it works well across different cuisines, including local Asian dishes. Also, it’s fantastic that we can now prepare delicious meals with sustainable crab meat.

Now that Shiok has championed the flavor of crab, it’s working on perfecting the texture of the crustacean by introducing scaffolding during the growth process. The company is also exploring how it could lower the production costs of making seafood via this method and aims to commercialize its crab meat by 2023.

Shiok’s road to market will be cleared by regulatory hurdles it would likely face in other countries, now that Singapore has been granted regulatory approval to cell-based meat when it approved the sale of Eat Just’s GOOD Meat Cultured Chicken.

The company uses proprietary technology to isolate stem cells from shrimp, crab, and lobster to produce the meat. Then, the harvested cells are grown in a nutrient-rich environment (like a greenhouse), and after 4 to 6 weeks, the result is real crustacean meat.

This new way of producing seafood meat solves the increasing global demand for traditionally caught seafood. Unfortunately, the global industrial fishing industry destroys marine ecosystems and wreaks havoc on the environment. Meanwhile, the crustacean industry is responsible for 22% of fishing-related GHG emissions, despite making up only 6% of global catch landings.

Our mission is to develop cell-based crustacean meats that are contributing towards a cleaner and healthier seafood industry and solving for the inefficiencies around global protein production. We are working very hard on making sure that our products are delicious, healthy, and affordable in the long run.

Besides reducing emissions and preventing overfishing, one of the many benefits of growing seafood from cells as opposed to catching it, is that the process can be carried out in landlocked areas.

However, two significant obstacles are standing in the way of Singapore’s dreams of “animal-free meat” self-sufficiency. The first is cost. For example, Shiok Meats’ “shrimp” paste costs the company about US$5,000 to produce one kilogram of the paste, far from commercially viable.

In addition, most lab-grown cells are nourished with a growth medium, often fetal bovine serum (FBS), extracted from aborted calves. FBS is used widely in the biotech industry; its production is highly regulated worldwide. However, its supply is limited, and its cost is outrageous: 500 milliliters costs approximately US$500.

Most importantly, an industry based on producing meat without animal suffering should not include ingredients from slaughterhouses. But that’s precisely where FBS comes from.

When a cow arriving for slaughter is pregnant, that cow is slaughtered and bled; then, the fetus is removed and brought into a blood collection room. The fetus, kept alive during the following procedure to ensure blood quality, has a needle jabbed into its heart. Next, its blood is drained, which usually takes around five minutes until the fetus dies. This blood is subsequently refined, and the resulting extract is FBS. Millions of fetuses are slaughtered this way. FAO estimated that the percentage of slaughtered pregnant dairy cows is between 17 and 31%.

There are alternatives to FBS —People for the Ethical Treatment of Animals has compiled a list of 74 potential cell culture alternatives, but almost all are cell-type specific. In contrast, FBS is a universal growth medium, meaning you can take nearly any cell type, throw it into a petri dish with FBS, and the cells will grow.

The second big question for the city-island-nation is whether domestic production will reduce its reliance on foreign supply. Substances like FBS are imported, as are the ingredients needed for Singapore’s booming plant-based protein market.

On April 26, Bühler, a global leader for food processing solutions, and Givaudan, a leading global company in Taste and Wellbeing, opened a new Protein Innovation Center in Singapore. It serves as an R&D facility for plant-based protein companies that want to produce new recipes and learn how to industrialize them. However, yet again, most ingredients need to be shipped into the country.

One potential solution to Singapore’s reliance on foreign ingredients is food waste. There are already companies making vegan meat, dairy, and protein from food waste. Another way to make protein in a factory is via fermentation. Usually, the fungus or microbes that produce such protein would be fed with imported glucose; however, scientists are exploring whether they are partial to old yeast from Singapore’s breweries or coffee grounds from its cafes.

The future of Singapore’s blossoming protein industry may be a mix of animal cells and vegetables. “The trend we see right now is a mix of cultured meat and plant-based protein. Full cultured meat in the market is far away, but animal proteins help enhance the texture of plant-based products,” explained Adrien Beauvisage, Buhler’s president for Southeast Asia.