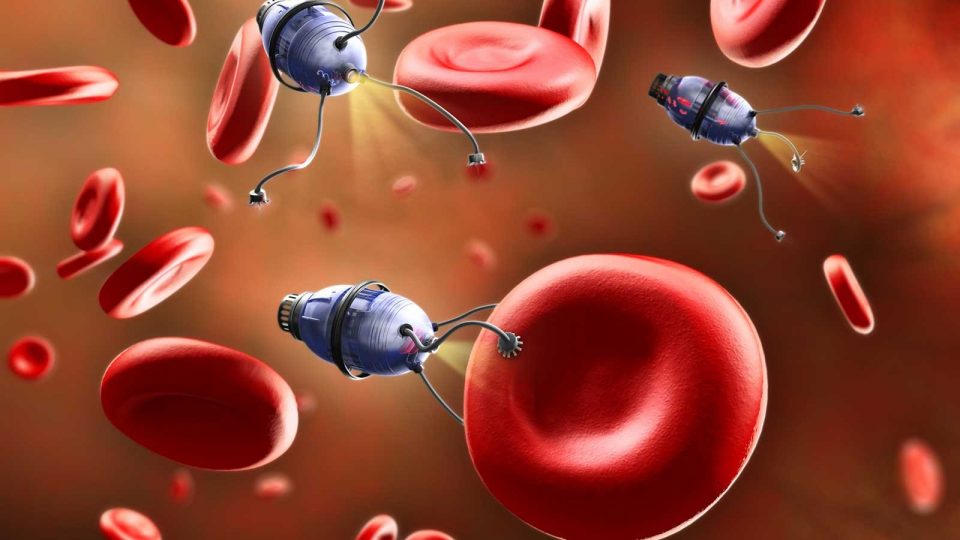 In the future, when someone has cancer, miniature robots will be able to go in their body, hunt down, and destroy cancer cells. When that day comes, and someone is undergoing surgery, they won’t need to be cut open because the tiny robots can go into their body and fix the problem.

Scientists from Arizona State University and China’s National Center for Nanoscience and Technology (NCNT) have developed robots a few hundred nanometers in size. To put things into perspective, in one inch, there are 25 million nanometers. The scientists injected the nano-bots into the bloodstream of mice and successfully shrunk tumors by blocking their blood supply.

How Did The Nanorobots Block The Blood Supply?

The bots were made from sheets of DNA rolled up into tubes, which contained a drug that clots blood. On the outside of the tube, the team placed a small DNA molecule that binds with a protein found only in tumors. When the robot makes its way to the tumor, this molecule quickly attaches to the protein causing the DNA tube to unroll and release the drug.

The research showed that the nano-bots specifically targeted the tumors and didn’t cause clotting anywhere else in the body. This behavior offers a promising future of cancer treatments without side-effects. Most cancer drugs have nasty side-effects because they can’t distinguish between healthy cells and cancer ones. The scientists are working with a biotech firm to commercialize the cancer-fighting robots.

NCNT professor, Guangjun Nie, one of the researchers who developed the nanorobots, claim that the nanobots can navigate, sense their environment, and carry out mechanical tasks much like a giant robot would.

“In the future, we will demonstrate even more scenarios for our nanorobots from monitoring disease to finding tissue damage, curing cancer, and maybe even finding and destroying plaques in our blood vessels,” Nie said.

The possibilities of the little bots’ performances are endless. In addition to enhancing the effectiveness and easing the side effects of potent drugs, nanorobots roaming in our bloodstream could potentially warn us of diseases. Tiny wireless surgical tools attached to the bots could enable doctors to perform medical procedures without having to cut people open.

Eric Diller, of the University of Toronto in Canada, is working on the concept of miniature surgeon-bots. He has developed robots under a millimeter in length that are constructed from elastic polymers filled with magnetic particles, which can drag through fluids and grasp objects.

The miniature robots are controlled by specific magnetic fields that are generated by a variety of electromagnets. Eventually, the robots could collect tissue biopsies or carry drugs inside the body. Diller’s ultimate goal is to develop a suite of wireless powered surgical tools.

Instead of having an open wound site, we would like to be able to inject surgical tools. We could do non-invasive, not just minimally invasive procedures with no external cuts and without the complications that come from surgery.

Meanwhile, some scientists are using nature’s miniature robots to fight disease. In Germany, a team from the Leibniz Institute for Solid State and Materials Research took sperm cells and loaded them up with anti-cancer drugs and fitted them with magnetic harnesses. The harness enabled the researchers to guide the sperm using a magnetic field toward small cervical cancer tumors that were pre-grown in a petri dish. The guided sperms managed to kill 87% of the tumors’ cells within three days.

In 2016, Canadian researchers from Polytechnique Montréal hijacked bacteria that usually swim along magnetic field lines. The team loaded the bacteria up with cancer-fighting drugs and used artificial magnetic fields to guide them towards tumors in mice.