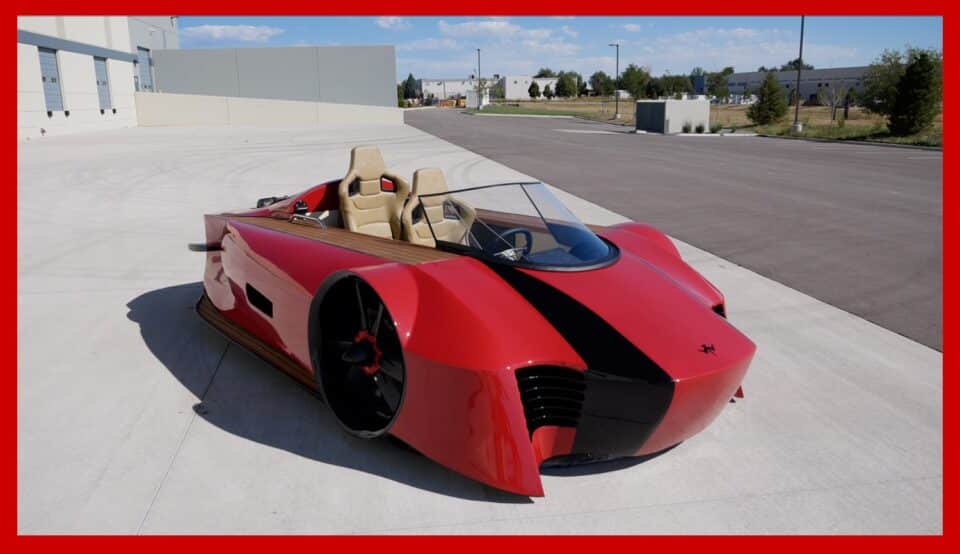 Hovercrafts have been around for more than half a century, floating drivers over water, sand, ice, and land, on what looks like cushions of air trapped under flexible skirts. While they are not common, several companies still produce them as utility vehicles or pleasure crafts. Electric vehicle manufacturer VonMercier is one of these companies. VonMercier claims its new Arosa is “the world’s first luxury sports hovercraft.”

The company has fitted the Arosa with a carbon body kit that looks like some kind of supercar, complete with what appears to be a set of 26-inch rims. However, those are not 26-inch rims. Instead, they are actually enormous fan outlets and are part of a novel system that VonMercier claims will make the Arosa “the most maneuverable personal hovercraft in the world.”

The problem with traditional hovercrafts is that they float on air and are blown around by giant fans. To stop, you must quickly turn the entire vehicle about 180 degrees and blast the fan or turn the power off, deflating the skirt and causing the craft to settle on whatever surface is beneath.

However, none of these processes suited the “luxury” concept VonMercier was going for, so the company developed and patented a “directional control system” using a hidden main fan at the back and thrust-vectored side fans. These allow greater control of lateral movements and yaw turns and act as a brake.

Another downfall to traditional hovercrafts is that they are extremely noisy since the fans have to run hard to get them off the ground and move them around. However, the Arosa addresses this issue with 88 kW (118 hp) worth of electric motors, enough battery for a 90-minute endurance, and up to 72 km (45 miles) of range per charge. One prototype version was a hybrid, this is why a Kohler engine can be seen sticking out in some photos. According to VonMercier, the Arosa will go faster than 96 km/h (60 mph) under the right conditions.

Unfortunately, hovercrafts can not be registered for the roads. Therefore, the Arosa will likely be treated as a boat and sports car body kit in most U.S. states. That said, they are expensive for a two-seater hovercraft that cannot legally drive on the streets. The cost for one Arosa will start at around US$100,000 or more depending on features you might add, such as personalized wood selections, custom paint jobs, fabrics, or infotainment gear. Regardless, the luxury hovercraft will surely turn heads.

VonMercier plans to begin customer deliveries this summer, with US$1,000 deposits being taken now and around 180 customers having already “expressed willingness to buy the Arosa.”

Cleaner Alternatives to Delivery Vans in the City