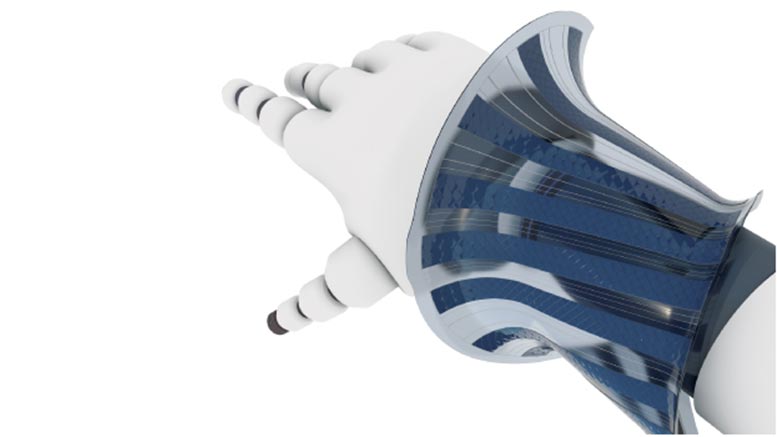 “Monocrystalline silicon is the photovoltaic industry’s favorite material for solar panels. It is non-toxic, low-cost, has good efficiency, excellent reliability, and maturity of the manufacturing process,” said Nazek El-Atab. He is a postdoctoral researcher in the labs of Muhammad Mustafa Hussain, where they are exploring ways in which to make stretchable solar cells.

The only downfall with silicone is its rigidity. But the KAUST researchers of Hussain’s lab have devised a way to turn rigid silicon into stretchable solar cells that can be flexed by a record-breaking 95% while retaining high solar energy capture efficiency of 19%. With their idea, crystalline solar panels typically used as rigid rooftop panels could be just as effective when incorporated into flexible robot skin or stretchy wearable electronics.

There are (thin film) solar cells made out of other materials that are flexible but they have their limitations. They are either made of costly inorganic materials or cheap but low-efficiency organic materials. Hussain’s team has figured out a way to overcome these restraints. Their method of producing stretchy and flexible solar cells is low-cost and highly-efficient. The research has been published in the journal Advanced Energy Materials.

How They Did It

The team tried out different shapes for the silicon islands. A sheet of rectangle-shaped islands was able to stretch to about 54%. When it stretched beyond that, the strain led to diagonal cracks withing the brittle silicon islands. Next, they tried diamonds, followed by triangles. Every pattern they cut, they kept in mind that every slice they made to the cell reduced the area available for light capture. In the end, the triangular pattern was the best.

The demonstrated solar cells can be mainly stretched in one direction—parallel to the interdigitated back contacts grid. We are working to improve the multidirectional stretching capability.

Hussain’s lab has also developed a multisensory artificial skin. The next phase of their research is to incorporate the stretchy silicon solar material onto the artificial skin so it can be powered by the sun.

Dog Learns How To Talk Using A Custom Soundboard