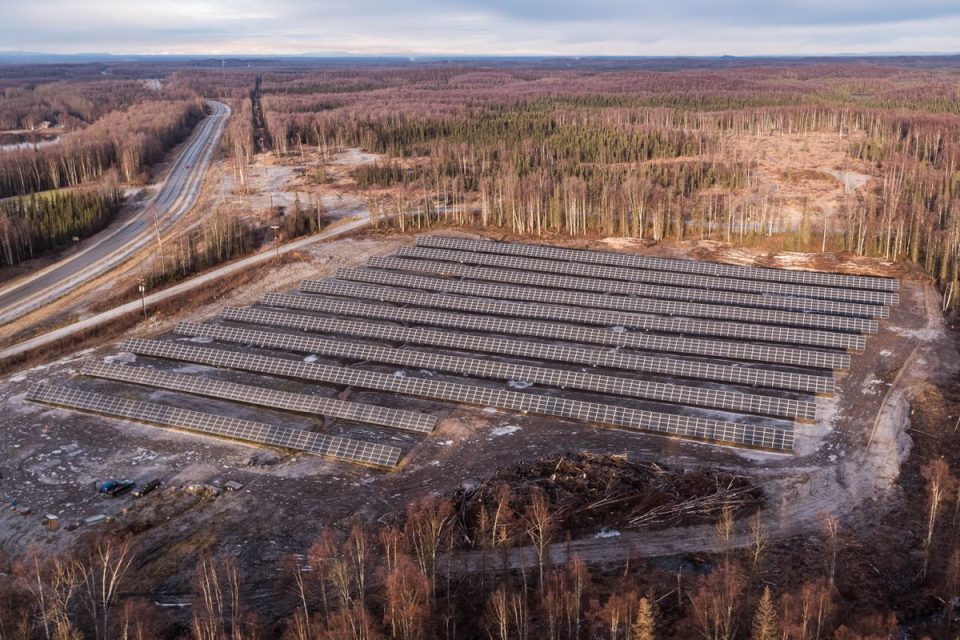 Solar panels are thought to only be useful in hot climates, wintry climates are no good for solar, or are they?

In November, just a few hundred miles south of the Arctic Circle, Alaskan solar company Renewable IPP officially began generating electricity. Willow farm is a 1.2-megawatt facility situated on a 17-acre property that is expected to provide power for around 200 homes.

Jenn Miller is the Chief Executive at Renewable IPP and she talked about the project:

We chose to go with a utility-scale solar project, as we felt that would provide the biggest impact. We got out and drove piles and built frames, which was great because we were able to learn a lot, figure out potential design problems and make changes to create the most efficient model possible.

The project started as a smaller scale 140-kilowatt system, then as Miller says; “We just said, let’s do one big system and see how that goes.”

After testing out the smaller system, the team of just 4 people decided to expand to the current size. They decided to reuse old gas and oil drilling pipes to build the panels framing and supports, which is good for the environment and cost savings.

As for the snow in Alaska, Miller said at the beginning they just plan on letting the snow pile up in the darkest months like December and January. They will pay someone to do some snow removal, and in the spring they will really stay on top of things and clear the snow more frequently.

They are also interested in applying different clear coatings that are currently being tested by the University of Alaska that could help the snow slide off from the 45-degree angle solar panels.

The project cost around $1.5 million in total, half of which came from private capital and the rest was funded by the Alaska Energy Authority’s Power Project Fund loan program. Renewable IPP came up with a solid business plan according to AEA Executive Director Curtis Thayer, who was able to put a financing plan together for the project in less than 6 months.

The power will be sold to Matanuska Electric Association (MEA) as part of a 30-year contract, and they expect to make around 2 to 3 cents per kilowatt-hour.

MEA is a member-owned utility company that previously generated around 12 to 15 percent of its energy through renewables, mainly from hydroelectric power. CEO Tony Izzo said the company has recently hired a grid modernization expert to determine what upgrades are needed to incorporate even more renewable power. “We’re looking to the future and meeting members’ needs, A lot of them have expressed a desire for us to reduce our carbon footprint,” said Izzo.

As for Miller and her team, they are already searching for ideal land to start their next solar project. The location is key, ideally close to existing power lines and close to the highway for easy access.

Projects like this will help determine how useful solar will be in cold climates. Advances in solar technology such as bifacial solar panels would also be useful as they would be able to capture even more energy from the reflective snow.

A company in Montreal, Canada called Innovative Solar Power has also recently designed new patented solar panels to be ideal for operation not just in cold climates but to withstand heavy snow load. These may prove especially useful in future Alaskan solar projects.

Australia Is Transitioning To Hydrogen, And The Coal Sector Is Excited

Everything you should know about reusable Q-tips

The Human Genome Has Finally Been Entirely Sequenced After Two Decades!