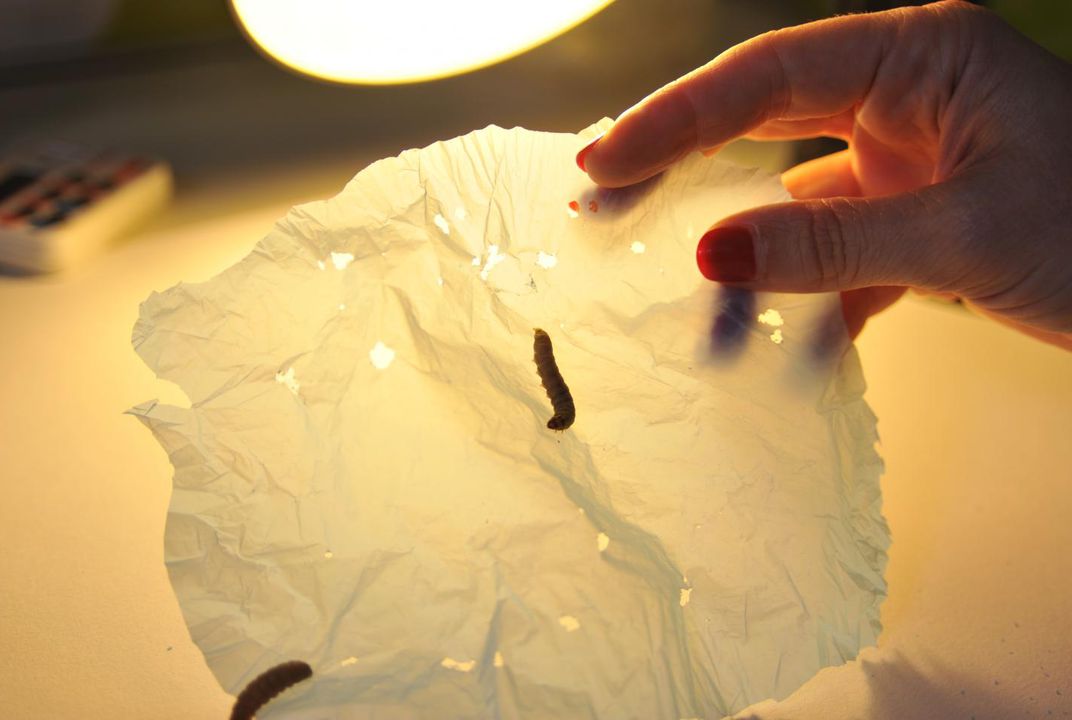 One day, Federica Bertocchini, an amateur beekeeper who is also a biologist at the University of Cantabria, in Spain, noticed caterpillars chewing holes through the wax in some of her hives and lapping up the honey. She was curious about these pests invading her zone so she decided to take them home to identify them. She picked them out and put them in a plastic bag to bring back after work. A few hours later, when she got around to looking at her captives, she found the bag was full of holes and the caterpillars had eaten their escape out of the bag and were roaming around her house. This is how the research of the plastic eating caterpillars began.

There have been past attempts to use living organisms to get rid of plastics but they have not gone well. A bacterium called Nocardia asteroides was the most promising species and yet it took more than six months to obliterate a film of plastic a mere half millimetre thick. Nevertheless, they are hopeful about this new discovery and Dr Bertocchini suspected wax-moth caterpillars would perform much better than that bacteria judging by the job they had done on her bag. 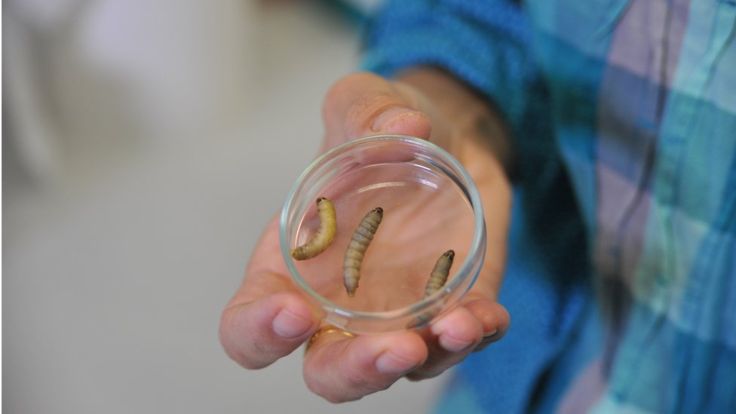 She teamed up with Paolo Bombelli and Christopher Howe, two biochemists at Cambridge University to learn more about the insects and their potential to tackle the world’s plastic epidemic. The caterpillars were discovered to be the larvae of a moth (Galleria mellonella) that typically eats wax in beehives. Apparently, it can also degrade plastic. The study was published in Current Biology. Experiments reveal the insect can break down the chemical bonds of plastic in a similar way to how they digest beeswax. Dr Bombelli and Dr Howe pointed out that:

“Like beeswax, many plastics are held together by methylene bridges (structures that consist of one carbon and two hydrogen atoms, with the carbon also linked to two other atoms). Few organisms have enzymes that can break such bridges, which is why these plastics are not normally biodegradable.”

Plastic can take hundreds of years to decompose completely on its own, but in just a few hours these little bugs chewed away holes all over a plastic bag. About 80 million tonnes of the plastic polyethylene are produced around the world every year. These scientists wonder if the caterpillars could help in eliminating some of this accumulation.

When they put wax-moth caterpillars onto the sort of film it had taken the bacteria Nocardia asteroides 6 months to deal with, they found that holes appeared in it within 40 minutes. Sounds great right? Well, upon further examination and observation they found out that the total amount of plastic the bugs can consume is still not enough.

The researchers calculated that their caterpillars each ate an average of 2.2 holes, three millimetres across, every hour, in the plastic film. 12 hours in they had consumed a milligram of shopping bags. Such bags weigh about three grams, so 100 larvae might be able to consume one in a month. At the rate that humans are using and throwing away plastic the numbers just don’t add up.

Dr Paolo Bombelli is a biochemist at the University of Cambridge and one of the researchers on the study. He told BBC News:

“The caterpillar will be the starting point. We need to understand the details under which this process operates. We hope to provide the technical solution for minimising the problem of plastic waste.”

Dr Bombelli and colleague Federica Bertocchini of the Spanish National Research Council believe microbes in the caterpillar – as well as the insect itself – might play a role in breaking down plastic. They are confident that if the chemical process can be identified, it could lead to a solution to managing plastic waste in the environment.

“We are planning to implement this finding into a viable way to get rid of plastic waste, working towards a solution to save our oceans, rivers, and all the environment from the unavoidable consequences of plastic accumulation. However, we should not feel justified to dump polyethylene deliberately in our environment just because we now know how to bio-degrade it.” – Dr. Bertocchini.

Many questions and unknown variables remain. For instance, it has not been established whether the caterpillars gain nutritional value from the plastics they eat, as well as if they’re able to digest them. This means that, if there is no nutritional value in it for them, they could die early or they will also need other nutrients to thrive and grow.

Another factor is the composition of their faeces – if these turn out to be toxic, then there will be little point in pursuing the matter. But no matter what, this discovery is inspiring. It represents the hope that even if the moths themselves are not the answer to the problem of plastic waste, some other living thing out there might be.

Florida Buys 20,000 Acres of Everglades Wetlands To Protect It From Harm