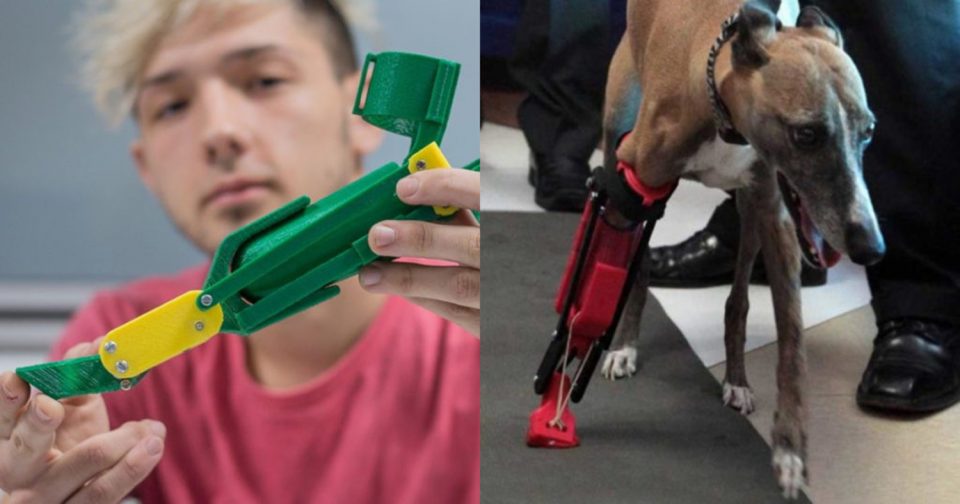 An 18-year-old computer engineering student in Buenos Aires, Alejandro Colli, has a 3D printing initiative, which helps out injured dogs in need of prosthetic limbs. In 2018, Alejandro launched a campaign on Twitter, while announcing his intention to begin making free 3D printed prosthetics for dogs and asked his 7,021 followers for publicity. He received over 36,000 likes and 77,000 retweets.

Alejandro was inspired by several Argentinian 3D printed prosthetic projects. However, he originally got his idea from Twitter, when he saw a video that went viral about a dog with a 3D printed prosthetic leg custom-built by its owner.  When Alejandro saw how happy the dog was with his new prosthetic, he decided that he wanted to achieve similar goals, but on a larger scale.

Promptly after Alejandro watched the viral video, he started to look into different ways of how he could produce 3D printed prosthetics. Eventually, he reached out to a nearby veterinary hospital for their assistance and knowledge. They gave him some 3D designs for prosthetics; then, he modified them before piecing the first prototypes together from his CAD models.

The first prosthetic took Alejandro around two months to complete, as it required extensive testing and modifications before it could be fitted to any animal.  At first, the pieces were difficult to get right and to fit together, but through experience and with time, he got quicker at making them.

An animal with an amputated limb may look like it’s doing ok, but actually, it could be in a lot of pain. The amputated animal can suffer from contra-lateral limbs, restricted mobility, spinal issues due to its unnatural movement, and other problems that can be debilitating. Unfortunately, many pet owners are not in a financial position to get prosthetics for their animals. Fortunately, Alejandro is making free prosthetics for animals, and those who need a prosthetic for their pet but can’t afford it can contact him.

This isn’t the first case of 3D printing technology helping injured animals. For example, in Brazil, there was a turtle named Freddy, who was severely burnt in a fire. The Animal Avengers group made Freddy a new 3-D printed shell. They also make 3D printed beaks for birds. 3D printed prosthetics are becoming increasingly more common for dogs around the world.

Since Alejandro’s first prosthetic, he has received several consultations from professionals along the way and has learned a lot from them. Now, he is currently planning to complete ten orders, coordinating with pet owners who are in need. He insists that the owners don’t pay anything, as he wants to help the injured animals for free and will cover everything out of his own pocket.

The Many Benefits of the Amazon’s Sananga Eye Drops