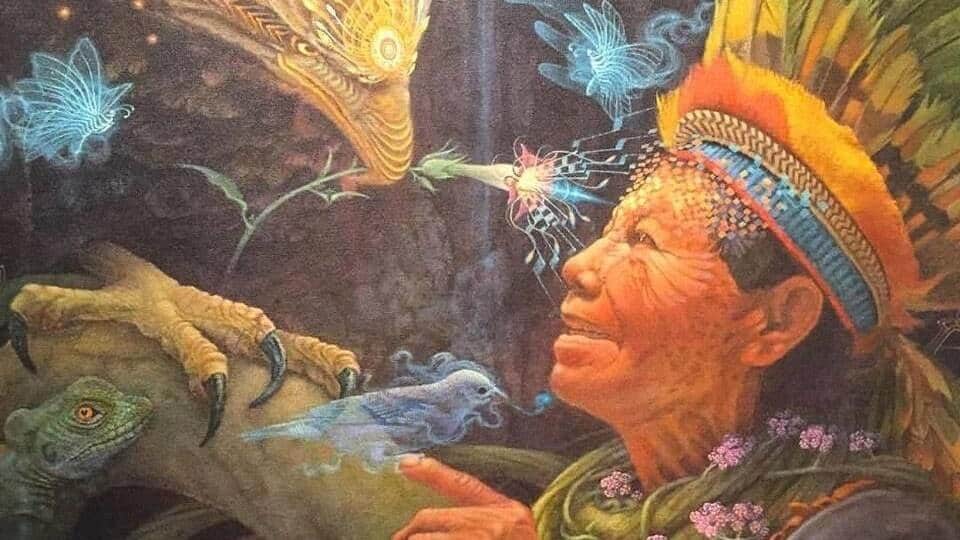 I first found out about Sananga eye drops while I was traveling through Pisac, Peru in the middle of the Sacred Valley. My curiosity about sacred plant medicines led me into the Shaman Store located not far from the market area.

I was introduced to this plant medicine by the owner of the shop who told me this was good to use for clearing our mind and working with during my meditation. Sananga is also known as “lightning in the eyes” because it burns like hell! But don’t let that deter you, let’s dive deeper into just what Sananga is and how using it can benefit the user.

Sananga is a traditional medicine of the Yawanawá tribe, an indigenous group that is known as the legal guardians of the Amazon. They have been using Sananga eye drops and other Amazonian plant medicines for generations. They use Sananga for healing both spiritual and physical ailments, which include improving their focus and clearing out distracting energies before going on a hunt.

There are different Sanangas one can purchase. I chose one based on a recommendation while I was at the shop. It was created by the Yawanawá tribe in Brazil to help clear the mind, open up our third eye and help with meditation, and improve overall eye health.

Sananga eye drops are made from the Tabernaemontana undulate shrub of South America. They take the bark from the roots of the shrub and grind it into a very fine powder, which they strain several times through mesh using freshwater. Not all of the active ingredients have been scientifically proven, but it is said to contain ibogaine, which is known to have neurological and psychological benefits. It also contains several alkaloids that can have strong psychoactive effects.

The Medicinal Properties of Sananga

First and foremost, Sananga has spiritual properties to clear our blocked energies, emotionally, spiritually, and physically. The more we work with the plant, the more benefits we will start to feel from it. It can seek out the root of our problems or diseases and guide us.

The Yawanawá tribe and other Amazonian tribes have long used the plant to increase their long-range vision and sharpen their senses before going out on a hunt.

Sananga has been reported to help people with severe eye diseases like glaucoma, cataracts, and even blindness.

Proper Use of Sananga Eye Drops

When purchasing Sananga it’s recommended you keep it in the fridge, where it can be stored for up to six months. Sananga should not be used continuously, rather used for one week and then take a few days off, before starting again for another week on.

To administer the drops it’s best to be lying down in a comfortable low light setting. It’s easiest to have a friend administer the drops, however, they can be self-administered. The burn can be quite intense when you first begin using the Sananga drops, but it’s important to put the drops in both eyes quickly so it can evenly balance out the energies.

After administering the drops your eyes will adjust to the burning, just lay back or sit in a meditative position so you can relax, focus on your breathing and allow the plant to work its beneficial magic. The burning sensation will gradually lessen the more we work with Sananga.

If you are looking to increase your spiritual awareness and reach higher levels of consciousness, I recommend giving Sananga a try.

‘Higher Hemp’ Provides CBD for Our Health, & Hemp Plastic for the Planet

Walk Above The Trees Along A Spiral Walkway At Camp Adventures