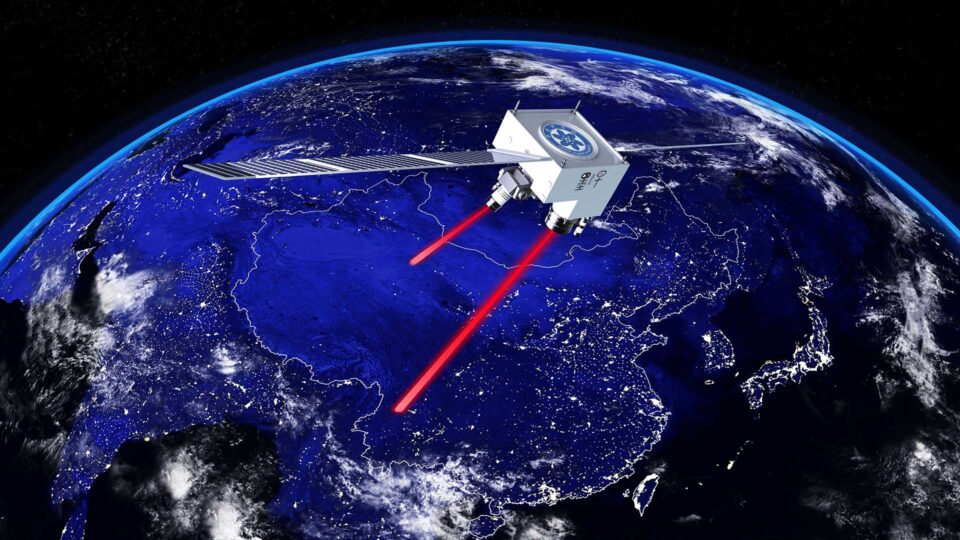 A Chinese team of scientists successfully sent a quantum-encrypted message hundreds of miles further than anyone’s ever sent one before. The transmission traveled 756 miles (1,200 km) – over twelve times the distance of the previous record – beamed down from an orbiting satellite to a facility on the ground.

Lead author Jian-Wei Pan, a quantum physicist and professor of physics at the University of Science and Technology of China, told Space:

Previous attempts to directly distribute quantum keys between two ground users under real-world conditions have reached distances of only around 62 miles (100 km). A promising solution to this problem is exploiting satellites.

The researchers managed to increase the distance so dramatically because the data didn’t have to travel through different materials on Earth. Just imagine how much simpler it is for entangled photons to beam through the vacuum of space – it’s like a gentle, turbulence-free breeze.

That way, one can conveniently connect two remote points on Earth with greatly reduced channel loss because most of the photons’ propagation path is in empty space with negligible loss and decoherence.

For the experiment – which has been ongoing since 2017 when quantum communication was first picking up pace – the team used a low-orbit satellite named Micius to downlink data to an optical ground station. The pair of entangled photons were generated onboard, split up, and then distributed by two bidirectional downlinks to two separate ground observatories in China– one in Delingha and the other in Nanshan.

In 2017, China also inaugurated the first long-distance quantum communication landline on the planet. It connected the coastal city of Shanghai with the capital city of China. And ever since, quantum communication has been considered the next big thing in data exchange because it can provide a super secure way to share information. And that’s precisely what this new experiment represents: a step towards developing an ultra-secure, global system for sharing hacker-proof encrypted information.

This improved mechanism of beaming the quantum messages from satellites could revolutionize how we share sensitive data, protecting people’s information better as we enter a time of increasing cybersecurity threats. So, not only does this experiment present the capability of satellite communications but also of the practicality of quantum computing.

Meanwhile, on the other side of the globe, America is on the verge of developing an “unhackable” quantum internet with hopes of having a working prototype within a decade. Overall, the consensus among experts is that a communications system using quantum mechanics is among the most critical technological frontiers of this century.