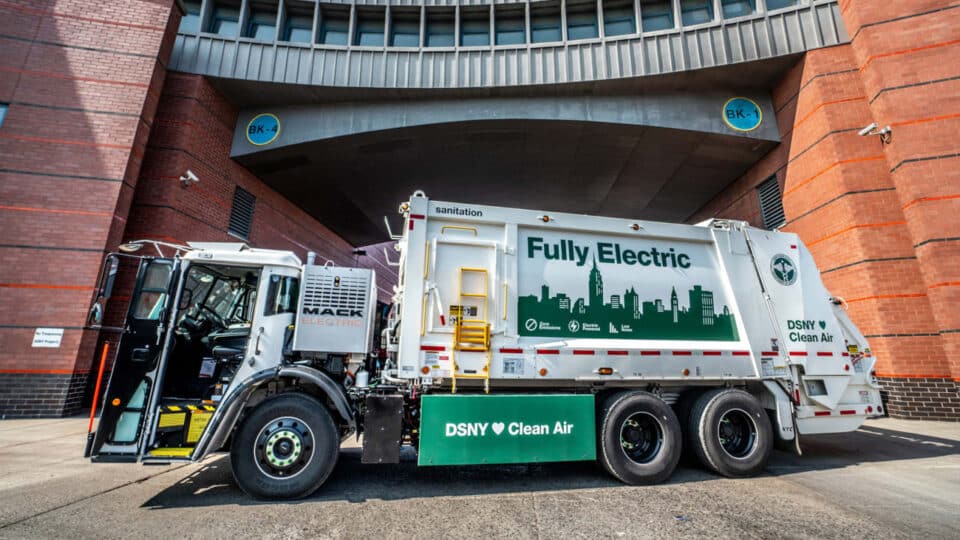 Garbage trucks weigh many tons and operate at the gas-guzzling range of 0-35 miles per hour, making continuous stops. They are prime candidates for an electrified makeover. So, the New York City Sanitation Department has begun gradually electrifying its garbage collection fleet, starting with retrofitting a dozen trucks with hybrid-electric motors.

By Canadian company Effenco, the technology uses highly efficient ultracapacitors for energy storage instead of lithium-ion batteries commonly used in electric vehicles and hybrids. Ultracapacitors store quick-use bursts of electricity, which is good to operate waste compaction and other high-energy jobs executed when the vehicle isn’t moving.

Ultracapacitors’ immense electrical delivery decreases their capacity to store energy, meaning vehicles fitted with them will have a shorter range than those sporting a lithium-ion battery. But ultracapacitors have much longer lifespans and can discharge millions of times without wearing down.

Ultracapacitors, we believe, are better suited for heavy-duty and high-power applications. The downside is you can’t store a lot of energy in them … But in terms of cycling, they can do millions of cycles with no effect on battery life. It’s well adapted for race cars and heavy-duty trucks.

Effenco’s technology can also be found in Los Angeles and Paris in vehicles such as port terminal tractors, dumper trucks, and more. It reduces greenhouse gas emissions and saves fuel.

So, the department has ordered 14 trucks with factory-installed Effenco technology, thus paving the way for a more electrified city fleet.

[It] has a very ambitious greenhouse gas reduction goal and reprioritizes the environmental direction of the NYC fleet.

Since Effenco’s system is hybrid, no charging infrastructure is needed, yielding a 30% savings in fuel consumption compared with fully electric vehicles that have to sit on the mains all night.

Another benefit is noise reduction. Standard diesel engine trucks are dangerously loud. The truck driver can’t hear if a car is approaching, passing from behind. Arsenault said:

There’s a lot of accidents among waste collection operators. They don’t hear each other, but they also don’t hear the cars that are coming around because the diesel engine is making so much noise.

Furthermore, a diesel truck constantly spews out toxic fumes as it stops and starts – something a garbage truck frequently does. These fumes are hazardous to the workers and pedestrians. An electrified truck delivers significant reductions in these gases, improving the environment for people in the vicinity and the whole planet.

The company plans to expand the use of its technology shortly. It has already raised CAD 10 million in financing for operations expansion across North America and Europe. This funding is in addition to an exceptional fiscal year that boasts soaring sales in four countries as more governments strive to meet their targets for emissions reductions.

There are more than 2,000 general collection trucks in the New York sanitation fleet alone. Arsenault envisions Effenco’s system in each one, helping the world become cleaner and the city and state achieve its emissions goals.

The company is also developing high-intensity wireless charging station technology for use with its ultracapacitors. If used, the systems charging points would be installed along a designated route, wherever the trucks go.

So, there’s no need to plug it overnight or something. As it does the route, there are some areas where the vehicle’s operation is immobile, and we want to make sure that we can leverage data. We can have a wireless charging point located at that same place so that as they do the work, they can also top off the ultra-caps.

That’s the key for us to unlock full electrification and achieve coverage of the entire range of the vehicle electrically.

Meanwhile, in the US, President Joe Biden had pledged to electrify the entire government fleet of vehicles, and congress has proposed a bill to invest $500 billion in electric public transit. A recent study found that the country could save billions every year if everyone switched to electric cars. Another study also found that electric vehicles produce hundreds of times less waste than fossil fuel cars.

Plastic-Eating Superworms Could Help Save The Planet