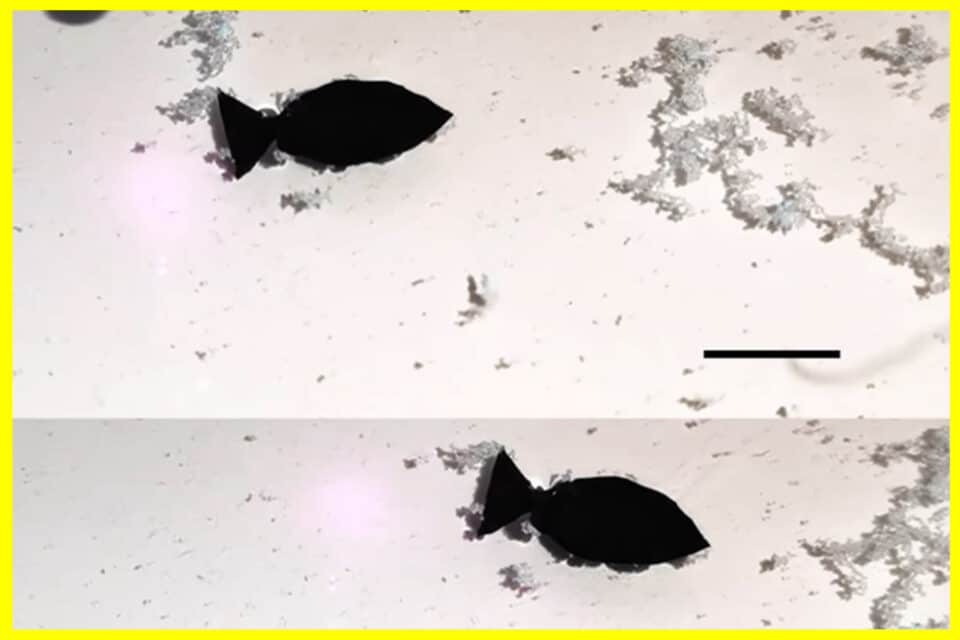 When it comes to the threats that microplastics pose to the environment and the health of living things, we still have much to learn. However, one thing is certain: they are already widely present and will only become more so. Thankfully, scientists have developed a revolutionary cleanup solution that draws inspiration from nature: a fish-like robot that can swim through the water and absorb microscopic plastic fragments as it travels.

Chinese researchers created the light-activated device to advance the design of soft robots used to clean contaminated water. Since these soft robots are frequently made with hydrogels and elastomers that don’t hold up well in these settings, the scientists looked to nacre, or mother-of-pearl, the composite material that mollusks release as a layer for their inner shell.

On one side of the material, there is a gradient that changes from calcium carbonate mineral-polymer composites to a side that is primarily filled with silk protein. The team was able to imitate this gradient structure by making composite nanosheets out of sulfonated graphene and molecules with hydrophobic interiors and hydrophilic exteriors.

To construct an orderly gradient resembling that found in nacre, these sheets were treated with various amounts of polyurethane latex mixes and then built layer by layer. This was then transformed into a fish-shaped miniature robot that was only 0.6 in (15 mm) long, had a near-infrared laser light in its tail, and had remarkable flexibility and durability.

The fish is propelled forward at a speed of 2.67 body lengths per second by the tail flapping as the laser is turned on and off. According to the team, this is roughly the same speed as phytoplankton but quicker than other soft swimming robots of a similar design. In addition, the team’s trials demonstrated that the robot could repeatedly adsorb polystyrene microplastics and transport them to other sites. Impressively, it could repair itself after being severed, maintaining its absorption capacity.

The researchers highlight that the robot’s speed, capacity to pick up plastic particles, and endurance could make it a valuable tool for tackling microplastic pollution in challenging aquatic environments. It could also serve as a model for other multipurpose robots with similar uses.

Navigating the Post-COVID Poker Boom in 2022

Bicycle and Car Accidents: What To Do If You Get Hit