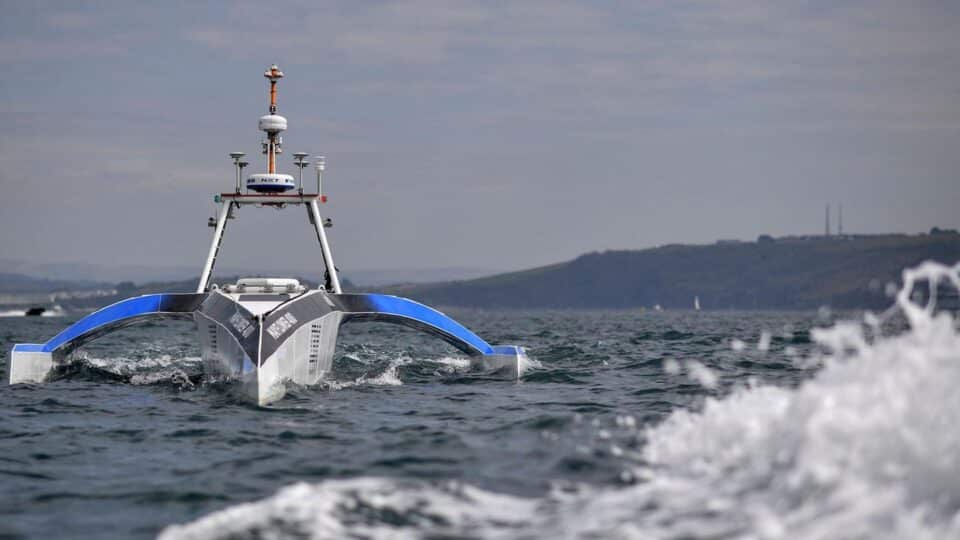 In 1620, the original Mayflower took 102 passengers sailing away from Plymouth, England, on a dangerous voyage to the “new world,” North America, inspired by hopes for a better future.

In 2016, the Plymouth community gathered and discussed how to memorialize the upcoming 400th anniversary of that Mayflower’s journey. The inspiring age-old sea challenge combined with a new kind of desire for discovery prompted ProMare Co-founder Brett Phaneuf to ask:

Why not use this opportunity to advance into the future rather than reminisce about the past?

He elaborated in a press release:

When the city of Plymouth talked about building a replica of the original Mayflower, I told them, ‘There already is one in Massachusetts — I grew up not too far from it. Instead, we should speak to the next 400 years of the maritime enterprise. Let’s be inspired by what the Pilgrims did and jump off into a new beginning.

That was when the idea of the Mayflower Autonomous Ship was born. We now call it MAS for short.

The timing was impeccable for Phaneuf to pitch his idea: an autonomous, crewless vessel that will cross the Atlantic, tracing the route associated with the original Mayflower and performing vital ocean research during the voyage.

The 5-ton, 50-foot-long trimaran, which makes its decisions and navigates in complete autonomy, will also study the environment by analyzing sea creatures and the presence of plastic within the ocean.

Phaneuf, who is also the Director of the Mayflower Autonomous Ship Project, said that what drove his vision for MAS was the growing urgency for more scientific knowledge about the ocean. He stated:

Despite two-thirds of our planet’s surface being covered in water, we’ve explored less than 5%. That ignorance should scare us because the ocean controls the entire climate of our planet.

The ocean generates over half of the world’s oxygen, covering 71% of the planet’s surface. It regulates the global climate by serving as a heat and carbon sink to reduce the ramifications of worldwide warming. Unfortunately, despite the ocean’s enormity, it’s not invulnerable to human activity. It’s warmer, more polluted, more acidic, and stormier today than ever before.

The Mayflower 400 (the name of the new autonomous ship) is a collaboration between the University of Plymouth, IBM, the marine-research nonprofit ProMare, and autonomous craft specialists MSubs. It will be powered by solar technology.

The ship’s makers first revealed their inspiring vessel in 2017. They had planned to set sail last year – exactly 400 years after the navigation of the original Mayflower – but the pandemic postponed those plans. But alas, the time has come, and the world’s first fully autonomous ship is taking its maiden voyage across the Atlantic this year.

The Mayflower 400 will be directed by artificial intelligence rather than a human crew. With no onboard crew or captain, Mayflower 400 employs only AI to traverse the ocean in its quest for data on sea levels, microplastics, whale populations, and other research subjects.

It has a sophisticated system of radar and cameras to learn about its environment continuously. Considerable gaps in knowledge persist about climate change, plastics pollution, habitat degradation, marine life conservation, along with other essential topics.

Most of the ocean data we do have is biased to where the commercial shipping routes are. To explore the rest, we can’t afford… But at the same time, we can’t afford to ignore the growing need for ocean research.

That’s why I became interested in using robotics and autonomy in ocean exploration. It opens up parts of the ocean that aren’t accessible for humans.

An autonomous ship becomes a machine rather than a floating hotel. It has the advantage of being purpose-built for whatever its function is.

If you take the human factor out of ships, it allows you to reimagine the design completely. You can focus purely on the mechanics and function of the ship.

Rosie Lickorish, a specialist of emerging technologies at IBM, said:

Having a ship without people on board allows scientists to expand the area they can observe.

MAS will kick off a new era of marine exploration when we need it most by leveraging state-of-the-art technologies and developing a new class of crewless, efficient, and environmentally-friendly ships.

Despite the Mayflower 400 being fully autonomous, a team in the UK will monitor the vessel 24 hours a day, prepared to control the ship if necessary.

ProMare envisions the MAS project and the future of marine research as a hybrid of crewed and crewless vessels and large and small devices, with varying degrees of autonomy — all working in unison to increase the quantity and quality of data.