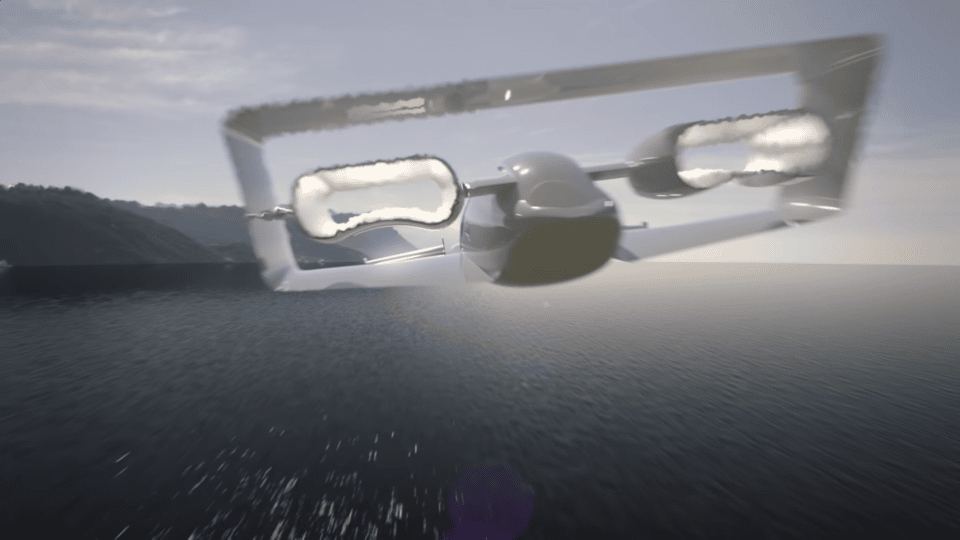 Not Jetoptera’s J-2000 concept. Its air taxi is a remarkably different version of the VTOL inter-city aircraft. It’s designed to use the company’s custom one-of-a-kind “fluidic propulsion system” (FPS), which involves no spinning blades – similar to Dyson’s bladeless fans.

The aircraft has bladeless-fan-inspired hoops at the front and back that behave as thrusters, relying on Jetoptera’s FPS that produces a strong air stream without blades. Both the hoops and Dyson’s bladeless fan, which inspired the hoops rely on fluid dynamics. They take a small flow of compressed air and use it to suck a far greater volume of ambient air through at ludicrous speed.

A New Atlas reporting explained the technology as such:

[It] uses a small, quiet impeller to generate pressure around an aerodynamically shaped loop until it exits at high speed through a slit running around the ring. The air is forced back over a wing-shaped surface all around the ring, where it develops the same kind of negative pressure that gives aircraft their lift.

In this case, though, any lift is canceled out by equal negative pressure zones all around the ring, and the net effect is a low-pressure vortex in the center of the ring that pulls ambient air through at a great rate.

The power required to propel its most miniature aircraft at 200 miles per hour for 30 minutes is 100 kWh. Battery technology isn’t sufficient yet, so the company uses a 75-kW turboshaft system (a gas generator).

According to the company, the benefits of the system are:

It improves propulsive efficiency by more than 10 percent while lowering fuel consumption by more than 50 percent compared to small turbojets. The propulsion system saves approximately 30 percent in weight compared to turbofans or turboprops and also significantly reduces complexity.

Plus, the aircraft is super light and straightforward to tilt, so it can easily hover and land and take off vertically. And, the FPS is the quietest propulsion method in the skies – a significant advantage for urban air transport.

Another interesting feature is how the propulsion system doesn’t have to be round, meaning it can take several forms. That’s why the J-2000 can have a box-winged airframe that takes up less space on a vertipad than other VTOLs or traditional helicopters.

Jetoptera is preparing a set of VTOLs, including a more diminutive two-seater with a 200-mile range, a bigger four-seater version with a 400-mile range called the J-4000, and a long-range STOL versions that can travel 1,200 miles.

The company is negotiating with the US Air Force, which is enthusiastic about the technology, and awarded Jetoptera two contracts to test its system’s noise profile and lift force levels.

The FPS will replace legacy propulsion systems and should enable faster, safer, and less-detectable aircraft.

However, the J-2000 “flying car” won’t be available to the public for quite some time.

UK Will Install 3,550 New Charge Points Over The Next Two Years