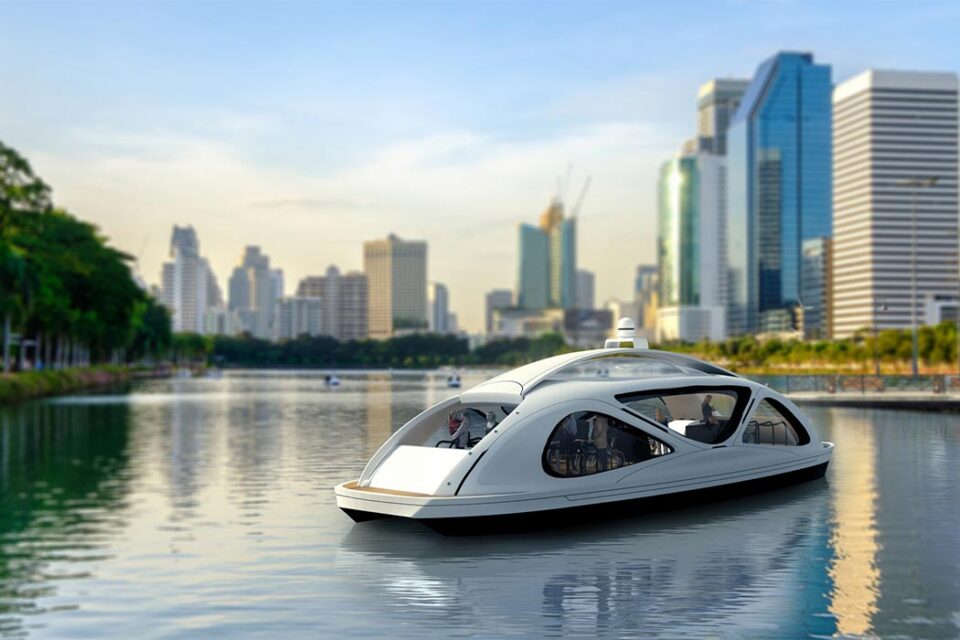 The low-rise Norwegian city of Trondheim is a quaint, colorful port with medieval origins. At first glance, the former Viking capital doesn’t look futuristic. But it’s the headquarters of a pioneering transport initiative: a self-driving fully-electric ferry.

It was developed by researchers at the Norwegian University of Science and Technology (NTNU) in 2018 as an alternative to a proposed bridge. The prototype was a success, and NTNU formed Zeabuz, the company building and operating the boat, a year later.

Zeabuz’s CEO, Erik Dyrkoren, says they will launch the little autonomous ferry next year. He says it works “like an elevator.” A canal separates the port and the city center. Passengers on either side can press a button to summon the boat to their side. The ferry wirelessly charges while it sits idle at the dock, waiting for someone to press the button.

The boat can fit 12 passengers and bicycles. It takes less than a minute to cross the canal. Usually, the journey would take pedestrians 15 minutes by foot.

The initiative is part of a grander movement targeting the use of waterways for more sustainability. Coastal areas have the opportunity to cut down road congestion by using channels with smart, climate-friendly mobility solutions. Zeabuz is the perfect example.

Autonomy fits like a glove with electric vehicles. This enables better control, optimal operation, safety, and maintenance. Our autonomy solution is world-leading and can enable self-driving ferries that safely maneuver among other boats, dock to the quay by themselves and handle passengers safely.

The idea is replicable wherever there are water channels. It can boost tourism and help reduce the vehicle count on the roads. And Norway isn’t the only country turning to waterways for sustainable public transport. In London, Uber is launching boat taxis along the River Thames. In New York, they’re expanding their ferry system to all five boroughs. And next year in Bangkok, the government will launch 5,000 electric water taxis and 30 new electric ferries next year.

Norway has led the way on electric ferries. It launched the world’s first electric passenger and car ferry in Sognefjord in 2015 and has pioneered new technologies and green fuels. Autonomous boats like Zeabuz are the next step, providing an alternative to land transport and making ferries more energy- and cost-effective. Automation also improves operational efficiency. Less energy is used, and without a crew or driver, there is more space for passengers.

Zeabuz ferries will be connected via 5G to a control center handled by a person who could summon help if necessary. However, the company says it’s exploring safety protocols that tie in with existing emergency services and that they are making the safety systems “foolproof.” Furthermore, the boats use sensors and cameras that scan for obstacles and a navigation system like submarines and airplanes use that monitors the boat’s position and speed.

There will always be a human individual, overseeing self-driving ferries. Complete autonomy, where you leave the machines to themselves, is not really a scenario that anyone is talking about.

Perhaps the best part of the initiative is the cost to ride – it will be free! They hope that making it, a free public service will encourage pedestrians to use it and thus help reduce road traffic.

Massachusetts Island Switches To E-Buses With Solar And Battery Backup